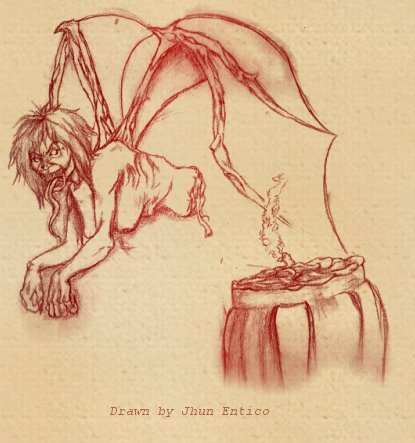 Another kind of aswang.

It is a creature in Philippine mythology. A bird-like monster, which is active during the night. They hunt human or even animals for food. Some older people in the provinces believe that it is like a crow, but larger, some says similar to a bat.

Wak-wak has huge wings that creates noise if they are on hunting.

Wak-wak is also believed as the helper of manananggal. They make noise to deceive the people, so that manananggal can come closer to his victim. Sometimes the Wak-wak itself are the ones who kill people. They are known also to suck blood of both human and animals. Wak-wak are said to dwell in the forest, or caves, or sometimes living with the manananggal's house.

They Can Change The Format

During daytime Wak-wak are wandering in the Barrio to find a potential victim. They turn into a small kind of bird, similar to a crow. A black bird even his feet and beak. By doing this, they would know if there is any dying person or with illness. They are gone searching for a corpse too. These are the preparation they do, so that later on at night they can just easily snatch the victim.

To drive them away you can sprinkle salt inside and outside your house. Hanging a garlic lantern in every corner of the house. While the others used to place a broom upside down in the doorway.

Stories and Comments about Wak-wak

It is just fox bats. They are large and eat fruits only. Keep dreaming your stories. It is entertaining, hahah

I once heard a story not so long ago that thier was a police man who was attack by a wak wak. At that time he attended a fiesta on the barrio of my wife and when he ask to leave he hug his pregnant sister and after that when he was about to start his bike he was lunged by a huge bat and he was dragged 6 meters away to his vehicle it was shocking. The wak wak then attempted to stab his arm with his claws but luckily he manage to pull his gun and shoot the wakwak on the ear,genital, wings and neck. The wakwak then wounded and bloodily escaped flew away. The police officer later then rushed to the hospital and the doctors cannot explain what kind of animal would do sort of damage. He got alot of cuts on his arm. He almost lost alot of blood and he said he was attack by a wakwak and some people witness the attack because it was broad daylight the creature was big than a dog and the head was larger than his body.

One time I was alone and my friend call me to come with him with his motorbike with his brother,to watch a basket ball game in another town ,while I am riding with my friend To watch a game in another town I saw a creature or kinda bird flying faster across the trees from the Left to Right on top of my head while we are driving towards a town to watch basketball. I can't explain if it was a wak wak or Pasatsat