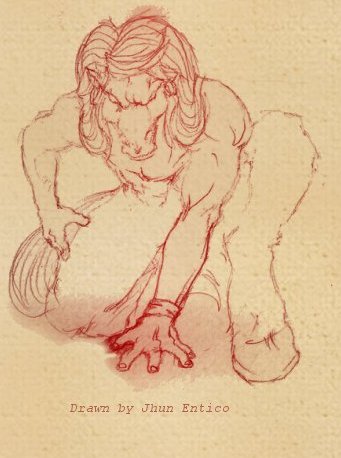 One of the many folklore stories in the Philippines is tikbalang.

Tikbalang is a giant invisible creature, with a face of a horse, body of a man and feet of a horse. Just like the horse it is hairy but scary than a normal horse. Not just tall, but as tall as five times of a coconut tree, and said to be a huge but invisible creature. Known to dwell in a forest or old big trees like ‘’balete’’ in the provinces of the Philippines.

The stories of tikbalang or other evil spirits are often used by parents to scare their children, to avoid from going out far from their house, especially at night.

Tikbalang is also known as a smoker….. what?? Yeah a smoker of huge tobacco.. while sitting on a big branch of a tree and waiting for their next victim. They are there to protect of what they called kingdom. Maybe this invisible creatures get bored too. That’s why they used to play with the travelers. They have the power to transform and mimic a person. Tikbalang will keep on stalking you, and will pretend to be like someone close to you. He will walk with you, talk with you, until you get lost in the woods. It is not easy to determine if he is an evil spirit or a real human. A great pretender huh!!!

It is also said that sometimes you are unable to come back and believed that is taken by tikbalang.

You will know if he is just trying to mimic one of your close friend or relative, if you smell a smoke of a tobacco. Everybody knows in the remote provinces in the Philippines about the smoker tikbalang..

This Must Do to Counter

To counteract this, you should wear your shirt inside out. Or before you go to the woods ask a permission to pass by on his land, by saying ‘’tabi-tabi po, makikiraan po’’ or excuse me, let me pass.

In other regions, a tail of a sting ray can also be used to drive away tikbalang.

And they also fall in love and get engaged and then soon will get married.

Usually, we often hear from our forefathers that if it is raining on a sunny day, it is believed that a tikbalang couple are getting married. They seemed to be a romantic creatures too….

There are also bad and good tikbalang. Sometimes during full moon they come and play with people by pretending to be a human.

Filipino elders used to believe in a talisman or anting-anting. A talisman taken from a tikbalang will give you luck and a sure win if you gamble or join in a cock fight or any other kind of gambling. It will make you robust too. By wearing this, you are protected from a gunshot, gives you strong physique, a different kind of strength that enable someone to do a peculiar stuff.

If you know that a tikbalang dwells in an old tree near your house, you should always have a sting ray with you or you can hang it on the tree, in this case, he will be forced to leave.

Stories and Comments about Tikbalang

This is not tikbalang, your description depicts the KAPRE.

A tikbalang as believed has magical golden hair, that one strand of it can grant you a wish.