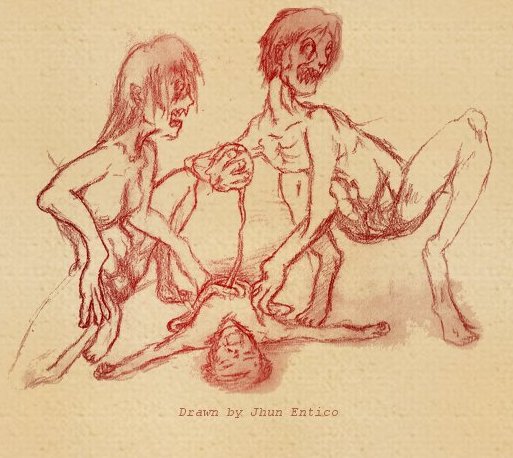 Syokoy or mermen, is a male equivalent of mermaid.

But syokoy’s the upper part of his body is a fish and from his waist down is a human legs. He has a blue skin, big eyes, sharp ang long teeth and scaly skin.

They are the leader and the protector to all the sea creatures. The guardian of the kingdom where the mermaid’s dwell. They attack human, or any vessel spotted in their territory. They kill people in it and take all the things they can find in the vessel.

Ruthless and have no love especially to human. He is well respected by the other species underwater.

It is also believed that they have the power to transform into a man. They pretend and act like a real gentlemen to attract women. They seduce and impregnating them. To continue and to propagate the race.

Sinking ships, missing travelers, tragedies in the water, is believed to be a curse of Syokoy.

Also known for their creativity. They produce decorations to cover themselves. They use materials like pearls, seaweeds, stones, sea shells to decorate their kingdom. Known to be a herbivore. Protect and keep all the living creatures of the same kind.

Every mermaid fantasize the leader Syokoy.

Usually he choose the most beautiful and adorable mermaid. Syokoy used to work to have food and mermaid tend to domestic affairs.

Some stories said, Syokoy is a handsome man, kind, seductive and full of joy in his heart.

They can survive out of water for an hour before they can dehydrate. Dehydration for them means death.

Stories and Comments about Syokoy